Turbo Charge Your Next Project !!

-- Combine the SPEED Of HIDmaker with the POWER of 32 bits! 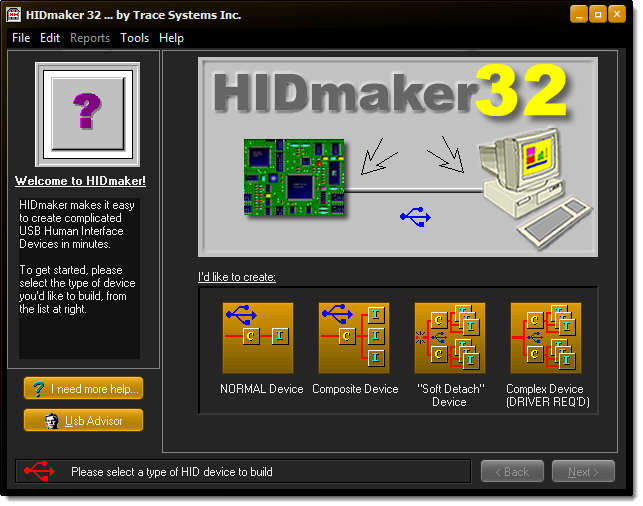 So, why would anybody want to make a HID device with big PIC32MX processor anyway?

There are lots of good reasons.  Here are the obvious ones:

So the bigger processor can handle more work, do more complex work, store more data, and can do it more quickly.

Here is a reason that is not so obvious: for historical reasons, the architectures of the bigger chip families are much more consistent than in the 8-bit PIC processors.

Microchip started out by making really small 8-bit processors with very little memory and very few hardware peripheral modules.  Over time, they developed families of larger 8-bit processors, having more memory and more complex peripherals.  But each one of those new families was like an isolated experiment -- developed by a different team, with sometimes jarring differences between processor families.  So to this day, if you find that you need to move an existing design to a bigger 8-bit processor family, you'll have to do a lot more work than you'd think, just to get your design working again on that newer chip.

But by the time Microchip developed the PIC32MX family, they had learned a lot, and they licensed the 32-bit chip architecture from MIPS.  This allowed Microchip to make a family of PIC32MX processors that is so consistent from one chip in the family to the next, that they were able to issue a PIC32MX Family Reference Manual.  For any particular hardware peripheral module that can be found in any PIC32MX processor in this family, e.g. the A/D Converter, you can read the documentation in the A/D Converter chapter of the Family Reference Manual.  So if you move your project to a different PIC32MX processor, your existing A/D Converter firmware will still work.

What about processor cost?  It is true that a larger 16-bit or 32-bit processor will cost more than a small 8-bit processor -- but not a HUGE amount more.  Going from a $3 8-bit processor to a $10 PIC32MX might seem like a big step, but trying to compete on price these days is a hard way to make a living.

Our existing HIDmaker customers are able to make smarter products that DO more, so they can sell a product like that for a higher price.  Even with a $3 8-bit PIC processor in it, they have been able to sell their products for hundreds, and even thousands, of dollars.

Some folks who have been working on 8-bit processors for years, are a little nervous about how hard it might be to learn to use a bigger processor like a PIC32. Those bigger processors may seem more complex when you first start looking at them, but you may have forgotten -- those 8-bit devices you are used to are pretty complex too, and they also took awhile for you to learn them.  But because PIC32s are so consistent, you only need to learn that stuff ONCE.

If you are feeling a little overwhelmed at the prospect of learning how to adjust to using a 16-bit or a 32-bit microcontroller, HIDmaker 32 will ease your pain.  Here's what you can do:

The fact that HIDmaker 32 can let you QUICKLY make a working software project that runs on a big PIC like a PIC32 or a dsPIC, means that you could create lots of related high-value products in a short time, and grow your business fast.

What You Get In HIDmaker 32

Now you can quickly develop powerful USB HID projects for the larger and more powerful 16-bit and 32-bit USB-capable processors from Microchip. Break through the speed, memory, and peripheral limit barriers of those 8-bit processors you used before.  HIDmaker 32 is the fastest way to upgrade your old HID project to get the benefits of bigger processors!

Get an UNFAIR ADVANTAGE over your competitors, with HIDmaker 32 !  Gets your USB HID project running, and communicating YOUR custom data, in as little as 10 minutes!  Pays for itself in 1 day!